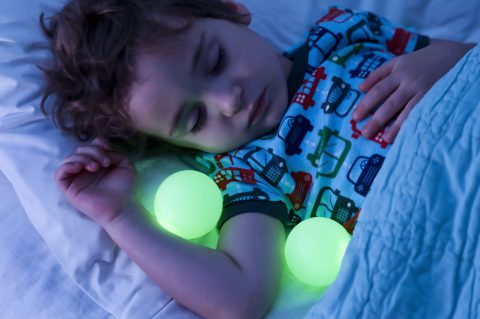 All of us have trouble sleeping, especially when it comes to nightmares, at some time or the other, and so do children, specifically between the ages of three and six years. Nightmares are nothing to be concerned about unless they become a problem that keeps your youngster awake at night. Nightmares can be very vivid and frighten a young child and although they are natural, it is best to deal with them sooner rather than later to avoid problems.

What Is A Nightmare?

A nightmare is a dream that generally happens later during the night during the REM (rapid eye movement) portion of sleep, and evokes a strong emotional response from the sleeper. Nightmares can be caused by various factors, and the fact that children have them often could have something to do with the fact that children are totally dependent on adults for their very existence and are therefore very vulnerable.

Most children will have nightmares once in a while, but toddlers of between 2 and 4 years of age are very prone to nightmares as this is the period in their formative years when their imagination blossoms, when normal fears start to develop and they actually have the ability to describe a bad dream.

Why Do Nightmares Happen?

The root cause of nightmares in children is not really known, but some things that may cause 2-4 year old children to have frequent nightmares are:

A child of between 5-8 years old may start to have nightmares due to the fact that at this age they begin to grasp real-life perils such as a fire, violence, car accidents, and death. Nightmares can also be caused by stresses such as starting school, divorce, a death in the family, or even a parent being laid off. Nightmares are a way of working through these types of stresses for a child of this age.

How To Know If It Is A Nightmare

When a toddler is too young to be able to tell you what has scared them in the night, it is difficult to ascertain what caused them distress. Nightmares are not the only reason that a toddler might waken and be upset; sometimes a toddler awakens and is upset because they have not yet learned to go back to sleep naturally and need a bit of comfort and cuddling. Other reasons could be that they are too hot or too cold, or that they feel ill.

If your toddler is usually a good sleeper and suddenly wakes up either screaming or crying, clings to you and has trouble getting back to sleep, it could be due to a nightmare. This is quite likely if it occurs during the second part of the night when dreaming generally takes place during REM. Usually they will also remember the nightmare the next day and it may bother them during their waking hours.

Nightmares should not be confused with night terrors, which are a sleep disturbance that occur during the first third of the night. Children remain fast asleep during night terrors, in a non-dreaming state, although they will show signs of being extremely agitated. Once the episode is over they will continue snoozing soundly and peacefully and will usually not remember anything when they wake in the morning.

How To Prevent Nightmares

There are no foolproof methods of preventing nightmares, but there are a few things that parents can do to make them less likely to occur:

If the nightmares still continue, or you feel that there is some form of stress that is causing them, discuss it with your child during a calm, happy period during the day. If they still persist and the child is afraid to go to sleep, discuss it with his or her pediatrician, as it could be an emotional issue that should be addressed. Studies also show how ferber method can be effective in coping up with sleeping problems for children.

How To Handle Recurring Nightmares

If your child is still plagued by nightmares, there are a few things that you can do to try and make their bedtime easier for both you and them, to soothe them, allay their fears and try to ensure that they get the rest that they need:

How To Soothe A Child After A Nightmare

Trying to soothe a toddler or young child after a nightmare is not the easiest thing to do, but there are a few steps that you can take to make things easier and calm them down enough to try to get back to sleep again.

If your child cries out in the middle of the night go to them immediately, and wake them if they are still sleeping so that the nightmare can stop. It is important that you give your toddler physical comfort, so hold them and rub their back whilst talking to them gently. If they want to talk about the nightmare let them, but do not force the subject if they do not want to discuss it. Children of this age are just beginning to understand the difference between reality and fantasy, so telling them “it was only a dream” will not really mean much.

Once they are calmed down, show them that there are no monsters under the bed or in the closets, give them their favorite toy to cuddle, leave a night light on and tell them that you are just down the hall if they need you.

Don’t try to just fob the nightmare off as unimportant; don’t try to minimize their fears. Show empathy and compassion and tell them that everyone gets scared sometimes, even you. Tell them that you understand that they are scared that there are monsters under the bed or a bear in the house; show them that there are no monsters under the bed or in the closets and assure them that the only bears in the house are the stuffed ones in their toy chest and which are nice and soft to cuddle with. We might also want to offer your child the best hot sleeper comforter and tell them that whenever they use it, they will feel our warm hugs while they sleep.

If your child is scared, tell him or her that they are always safe in their own house and in their bedroom, that you always lock all the doors so nobody and no monsters or animals can get in, and that you are right down the hall getting ready for bed and brushing your teeth or reading in bed, whichever will work better to help them to visualize you, and that you will check in on them from time to time after they go to sleep.

Avoid scary television or movies, or books with witches, an evil stepmother and poison darts, and check that your children are not watching violent crime on the news or violent or gory television programs. If you have to discuss that type of subject with your spouse, do so out of hearing of the children.

Desensitize Your Child To His Fears

You can help your child to face his fears in gradual increments by making a mommy or daddy bed up on the floor of their room if they are scared to go to sleep alone. Sleep there for a few nights in order for the fear to recede sufficiently for him to relax and get a good night’s sleep, then gradually inch the mattress closer to the door each night until you are sleeping in the hallway. Speaking of mattress; it plays a bigger role than you know. The comfort of your child is dictated by how good the mattress is. If the child isn’t comfortable, then there are higher chances of him waking up. Hence, if you think that might be the problem, then you can view the Eva Mattress and get him one, as this one’s comfortable. Once he can sleep successfully without having nightmares with you sleeping in the hall you can promise to tuck him in every night and check up on him often, and revert to sleeping in your own bed.

Play with him in his room during the day so that he can come to see his room as just another part of the house and not a “separation chamber” so that he once again becomes comfortable in it.

Chat to your child during the daytime and ask them to help you to make a list of things that would help them to feel safer at bedtime. This could include things such as whether they would like a night light on, the door open, a special toy or something else as a security object, and whether she would like mommy or daddy to check up on her after bedtime. This helps the child to feel as though they are in control of the fear.

Be careful to avoid getting trapped into letting your child sleep in your bed, as that could become problematic and difficult to put an end to.

There are various other methods that you could try, based on the particular personality of the child in question and by talking to them about their fears. Discussing the previous night’s nightmare in the cold light of day at the breakfast table the next morning is also very beneficial. You could also share some of your own dreams and how you handled them, which will help the child to understand that nightmares happen to everyone and need not be feared but can be discussed just like one discusses a good book or a movie.

You could also make a game of it, dressing up or drawing the dreams, and changing the ending to a fairy tale ending. This will help the child to express his dreams and fears, and will give him a sense of control over his the conscious as well as the subconscious events that occur in his daily life and empower him to deal with life and with the nightmares.